Variance in outcomes, rather than success ratio, should be the metric used to achieve expansion of the frontier of useful knowledge.

There are multiple ways to be guided by incentives. The first is imitation. It is an efficient route to get close to state-of-the-art results, but is unlikely to present a route beyond the frontier. In copying rather than implementing, you won’t understand the underlying process that lead to the final state, and are unlikely to be able to proceed as fast as the entity that got there in the first place. The approach you take is unlikely to be novel, and hence much progress past the frontier (beyond minor improvements in efficiency) is unlikely.

In a business context, you can think of it as establishing a business within an existing value network with no real differentiation. Or in an academic setting, taking established research and slightly tweaking it. In neither of these cases is imitation likely to lead to either novel solutions or large returns, but it may be a path to rapid if shallow ‘progress’.

A second is rapid and specific feedback systems. This is present in many administrative systems. In school and university, students are tested on a weekly basis on set tests. They get rapid and feedback that is finely tuned to the task at hand.

The phenomenon of ‘learning to the exam’ shows the dark-side of this. Instead of rewarding deep understanding of knowledge, students are incentivised to ‘hack’ the system, by rote-learning the few common questions types on the exam. Anybody who has ever been told by a teacher to stop asking questions off the syllabus knows this. Deep understanding need not apply.

Academia is oft thought-of as granting a high degree of freedom, but the criteria to make it there are rigid (through the education system), and even within academia you must have citations from researchers like-minded enough to get grants and attract students. You are disincentived from publishing in an unpopular area.

Any system based on this kind of fast and specific feedback will crush diversity in the outcomes generated. New and different outcomes are tautologically the engine of innovation. Our systems must be designed to be mindful of encouraging this.

Inherent immeasurability means that it is very difficult to create systems around them. Such systems may be ripe for abuse, as bad actors may feign to be working on a long term project that has yet to pan out.

The market-economy in general are oft thought of as having sparse rewards (your company either succeeds or fails), but cash is king and if a new business does not start producing profits or significant revenue by the end of a decade, its game over.

Successful sparse rewards have historically happened in two types of settings: * Scientific research contexts where actors are largely unconcerned about incentives. This can happen within the academic system if the correct incentives are applied, but also in corporate research labs or by independent researchers. * Downstream, emerging but un-deployed technologies get build out in speculative bubbles, where investment is disconnected from concerns about future-discounted cash flows (Bill Janeway writes about this in his book, Doing Capitalism in the Innovation Economy, a must-read).

Across both of these examples, we see the immense inefficiency in the “process of novelty”, which must proceed through essentially trial-and-error on long time horizons.

We can summarise these on a chart: 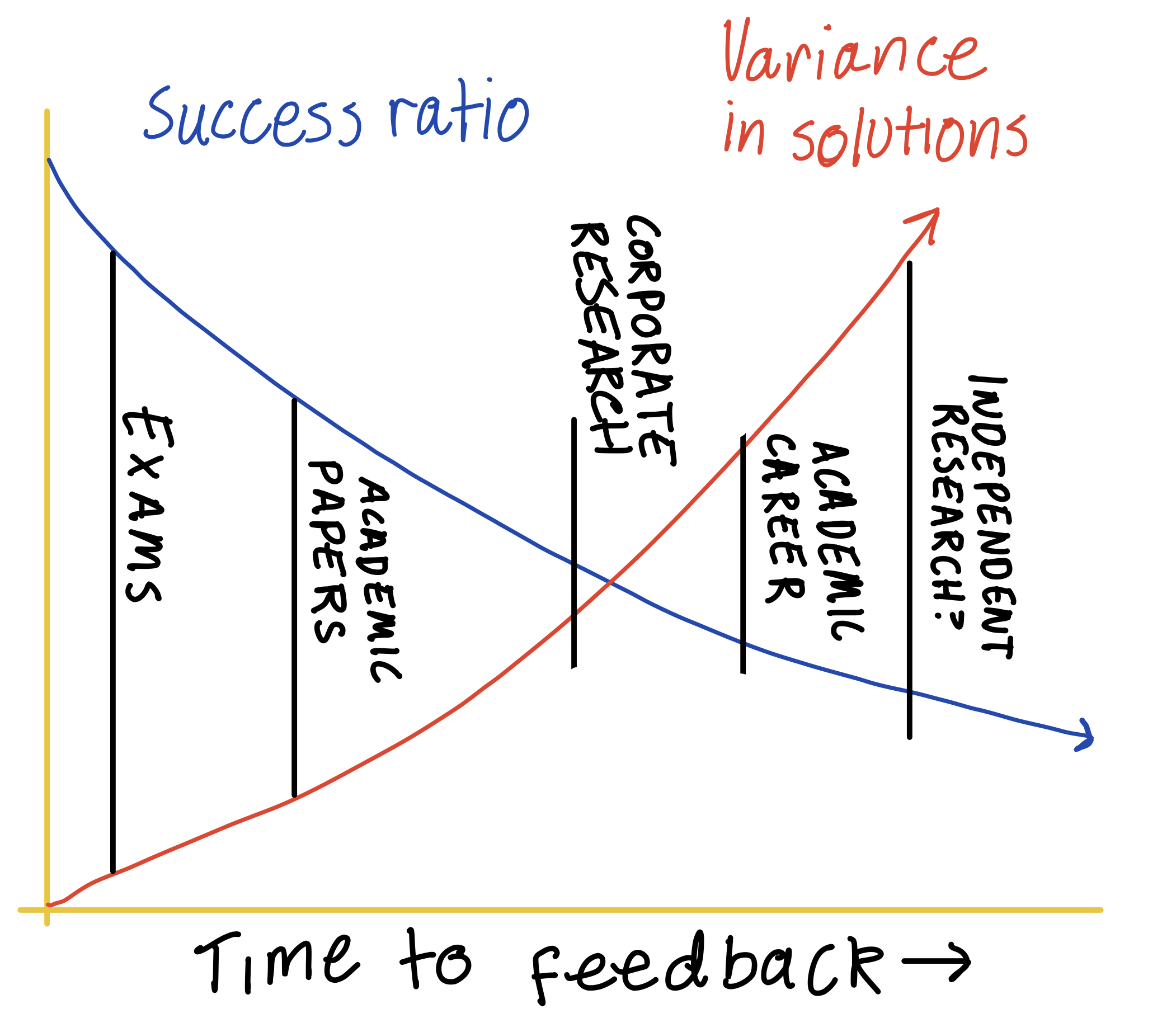 Time to feedback in various academic systems plotted against variance in outcomes. “Academic careers” means an individual researcher within the current system. I focus on academia as it’s hierarchical structures provide a neat taxonomy.

While it seems like rapid and precise feedback is important, in in fact reduces the value of the output you produce. This is because precise feedback can only be set up in systems which produce low-variance outcomes, and since you are not likely doing something truly new the output is not differentiated.

In areas with more sparse feedback systems (at least on the process level) we see we see extremely positively skewed effort-return ratios on successful outcomes, but high failure rates, and thus a high variance in outcomes: * In venture investing, limited liability means that your cash can only be lost at 1x but be returned with infinite upside in the case of success. * In fundamental science, the cost of failed knowledge acquisition is the time invested, but potential benefits are infinite in the application of that knowledge to both future research and in practical settings. * In learning systems, an attempt at improving reward by tweaking a parameter is one iteration, but the benefits of improving reward are potentially infinite over many trials as the knowledge of how to set the parameter can be scaled across all iterations.

If through either social pressure or systems set up, we as a society disincentivise risk-taking or deviation from the mean in individuals’ endeavours, we will get worse outcomes. While we may claim ‘success’ by increasing the median individual’s success or failure, society at large will suffer by having less new knowledge and worse systems. We must maintain a stubborn attachment to innovation and growth. It is easy to forget this as it is in opposition to what is required in a competitive market-based setting, where one unit of production is one unit of revenue. In the former, you must value variance and in the latter efficiency is king.

Variance in outcomes, rather than success ratio, should be the metric used to achieve expansion of the frontier of useful knowledge.